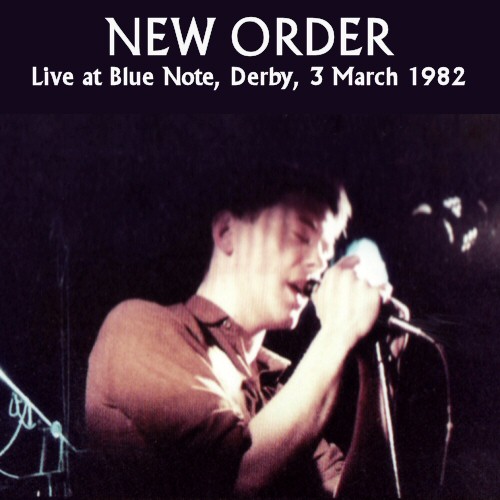 Many thanks to Adam for sharing this concert.
Could the first downloader comment on the quality?

"Derby Blue Note, 03 March 1982 was the first time I saw New Order live, and my first ever hearing of the soon-to-be-released new single, 'Temptation'. This night also saw the live debut of ‘Ultraviolence’, although at the time this song remained strictly ‘untitled’ by the band, forcing the bootleggers to refer to the song as “Who Killed My Father” (Barney’s improvised opening lyrics on this version).

I might be biased, but I think it’s fair to say that this gig must rate as one of New Order’s finest of all time; (well, at least from the ‘Movement’ era).  The Derby Blue Note was a small, very intimate venue, with a stage barely inches higher than the crowd area.  Indeed, during the third track (a storming version of Ceremony), the crowd’s wild ‘dancing’ accidentally unsettled some of the staging.  At the end of Ceremony (but before the fourth track, In A Lonely Place), you’ll hear one of the crew (Terry Mason?) shout: “Move back a bit – you’re pushing the stage forward.  Move back!  I don’t mind you hurting yourselves but don’t hurt the equipment”.  Classic!

There was so much power in New Order’s performance on this night; (I really hope it comes across in the music files).  The gig was set around ‘club hours’ (9pm to 2am) and as remember it was well after midnight before the band took to the stage.  By this time, a highly charged and expectant crowd had created an electric atmosphere.  I made it right to the front and remember thinking I could almost touch Barney on the head when he knelt to play the guitar intro to Temptation. I don't think I've ever heard a live version of Temptation played better than that night, and Barney's incredibly moving guitar intro remains a spine tingling moment whenever I listen to the bootleg of this performance; (in true Paul Morley style, I was emotional to the point of tears, and proud of it!)."