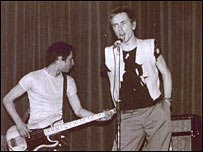 "This story begins on July 20th 1976, when the Sex Pistols played at the Lesser Free Trade Hall in Manchester, supported by local bands Slaughter and the Dogs and the Buzzcocks (making their debut). According to legend, this gig inspired Joy Division to buy guitars and form a band. Although the truth may be less dramatic, there is no doubt the event did stimulate the Manchester music scene in general and the future members of Joy Division in particular."

So this was the concert that started the Manchester revival! The apparently talentless Sex Pistols...well, the guitar riff in "No Lip" is seriously groovy!!